People who love everything to do with flags (design, function, history, etc.) unite across the world.

Do you find yourself inspired by the history of a country’s flag? Or perhaps you’ll watch a sports flag fly in the stands instead of paying attention to the actual game. You maybe even have a secret journal where you hide all of your own custom flag designs. If any of these are true, then I can tell you that you aren’t alone. You’re just a vexillologist.

There are many different associations around the globe that focus on the study of vexillology. Vexillology is defined as “the creation and development of a body of knowledge about flags of all types, their forms and functions, and of scientific theories and principles based on that knowledge,” by the International Federation of Vexillological Associations (FIAV, the French acronym).

Established in 1967, the FIAV has headquarters in both Houston, TX and London, United Kingdom. The FIAV holds an international congress every other year, hosting seminars on specific flag topics and flag-related tours. This year’s congress will be held in Sydney, Australia. Their own flag was designed with their founding, portraying a blue field with two yellow, interlaced halyard loops.

A charter member of the FIAV is the North American Vexillological Association, which focuses more closely on the Canadian and US flags, as well as major vexillology topics. This organization was also founded in 1967 by Whitney Smith, who originally conceived the term “vexillology”. Their flag consists of a white “V” with a blue inner triangle on a red field, to represent the two countries that it’s dedicated to. 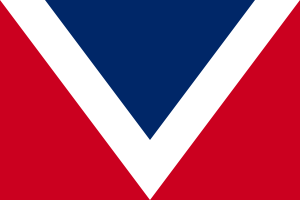 So if you keep a list of your favorite flags, want to know more about flag function, or aspire to design your own flags, be sure to find the nearest vexillological group that shares your passion!