While these fictional flags from movies may not be real, they are recognizable symbols to anyone who has seen these popular films. 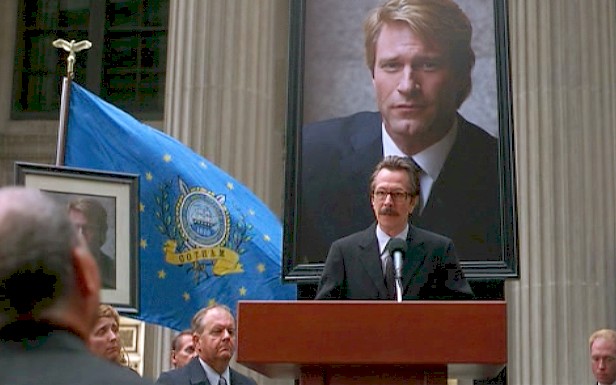 Gotham is a fictional city in the Batman comic series. The city has been featured in nearly every Batman movie throughout history. In the most recent Dark Knight Trilogy, scenes from Gotham were filmed in Pittsburgh and Chicago, among other cities throughout the United States. During this movie trilogy, the flag of Gotham appeared behind Police Commissioner Jim Gordon during his speech about the passing of Harvey Dent. There is not a clear description of the flag; however, it seems to feature a blue background with a ring of 13 stars at the center. Inside the ring of stars is an emblem that has two swords sticking through it and is lined by yellow rope. The emblem also features a scroll that says “Gotham”, and the date of “1620”. The Harry Potter series is arguably the most famous movie series of the past few decades. The series featured 8 movies stemming from the stories written in 7 books. In the stories, a boy (Harry Potter) travels to a magical school of Witchcraft known as Hogwarts. At Hogwarts, there are 4 associations which are known as houses. Harry was famously placed in the Gryffindor house, which helped him become a Wizard with positive intentions. Each house has specific colors, characteristics and flags. There are numerous versions of each house’s fictional flag, but their colors are symbolism generally remain the same.

The Hunger Games series has provided the most recent selection of fictional flags. The flag of Panem appears in numerous scenes throughout the series. This fictional flag is most prominent during the stadium scene (pictured above). The flag features a gold bird with stretched wings holding arrows surrounded by a wreath on a red background. In the movie, Panem is a fictional nation that is divided into 13 districts. Each year, 2 people from each district are selected to get into an arena and fight to the death. Residents from some of the districts begin to rebel, and a war breaks out. The final movie has yet to be released, but images of Panem’s new national flag (see below) have surfaced, indicating that the nation has been liberated from their evil President.

The new flag of Panem features 14 stars to represent 14 districts and sun rising to form a new nation. The background color of red is swapped out with the color blue. 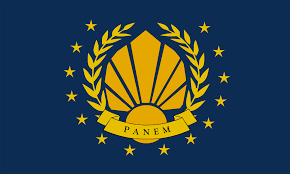