Thursday began the Olympic torch race for the 2016 Summer Games with a ceremonial lighting of the flame in Greece.

History of the Olympic Torch

Since the Berlin Olympics in 1936, the Olympic torch relays have begun in Olympia, Greece before being flown or shipped to its next leg of the race. The same will be happening this year as the torch makes its way on a 6 day tour through Greek cities before flying to Switzerland for a tour before flying again to Brazil where it will trek through 329 Brazilian cities ending in Rio de Janeiro. 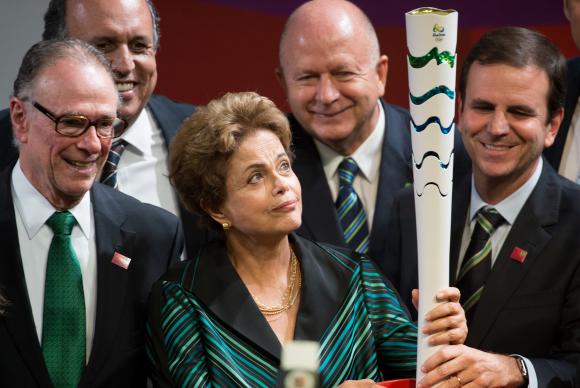 In this photo, President Dilma Rouseff holds the Olympic torch accompanied by several other Brazilian politicians.

The highest part of the torch stands for the Brazilian sky, which shines and illuminates everything it touches. The golden color also represents the gold medals athletes seek at the games. The green tier of the torch represents the mountains in their natural beauty with the green curves of its hills and valleys. The three blue tiers represent the sea, which may associate with the landscapes of Brazil and Rio. The last tier is for the ground, the land that holds Brazil’s history.

Flags lined the streets as the Olympic torch was carried through a town in England on its way to London for the 2012 Summer Olympics. 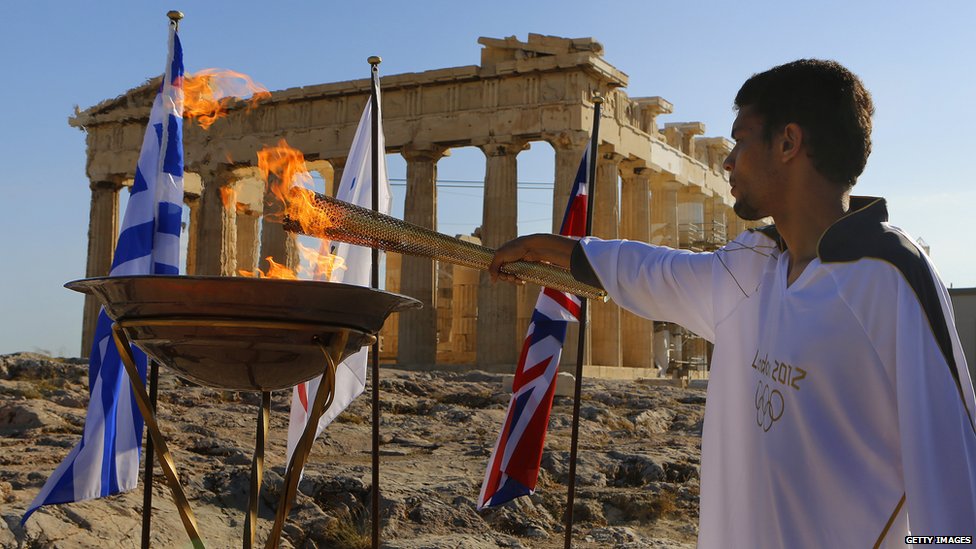 Greek high jumper Dimitrios Chondrokoukis lit a cauldron with the Olympic torch at the Acropolis in Athens on its way to the 2012 London Olympics.

In 2008, Chinese gymnast Li Ning lit the Olympic flame at the opening ceremony of the 2008 Summer Olympics while “flying” through the stadium. Behind him flew the China Peoples Republic flag.

Interested in learning more about the Olympics and nations that have participated in them? Stay tuned as we will be posting more history and updates as the games date closes in. In the meantime read our story over the 120th Olympic Anniversary and shop Collinsflags.com for all your flag needs!