Whether you’re flying your nation’s flag or Pinteresting patriotic crafts for around the house, we all have our unique ways of showing pride in our country. We’ve shown you stained glass flag art, tattoo flags and other creative U.S. flag art, but today we wanted to share flag art in graffiti form!

These very unique ways of showing patriotic prideare both beautiful and powerful. Follow along as we show you pieces from the United Kingdom, Brazil, the United Arab Emirates and the United States.

In 2011, Pictures On Walls invited graffiti artist Tlit to London where he created “Anarchy In The UK”. The piece was made from the lyrics of the Sex Pistols song “Anarchy In The UK” and colored into the Union Jack flag of the United Kingdom. During the World Cup in 2014, many graffiti paintings surfaced around Rio and Sao Paulo. While many of them were politically based with negative connotations, this rainbow cluster of hands holding up the world won our attention over. The globe highlights Brazil with the Brazilian flag covering its surface. While Brazil didn’t win the World Cup and finished 4th overall, we still love this piece!

In this piece the UAE’s national anthem is written in Arabic calligraphy in the shape of the national flag! The UAE celebrated 44 years of Independence this past December with cars, parades and much more. Read about it here.

The United States of America

In a tribute to the tragedy of 9/11, Mr. Brainwash, a famous New York graffiti artist, reached out to Century 21 to create this red, white and blue piece. Also in New York is the piece below. While it may not be a graffiti piece, we still included it because it’s on a wall and represents a flag design! 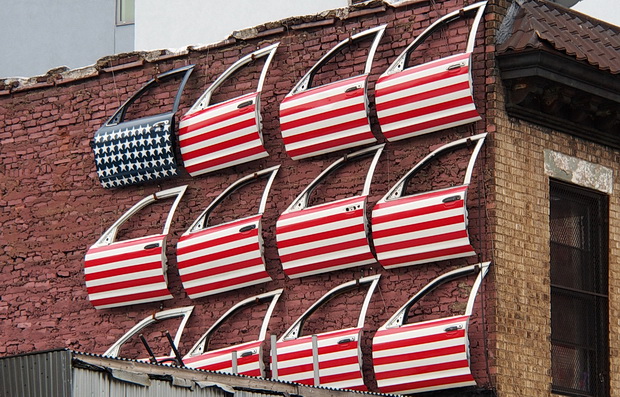 Near Williamsburg Bridge is this very unique art piece of car doors forming an American flag!