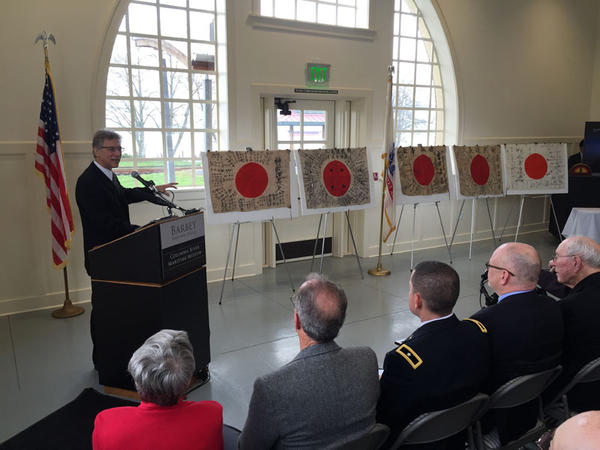 During World War II, some Japanese soldiers carried special flags with them during battle. These flags were designed by the soldiers’ friends and family before the soldier was sent to war. Many times during battle, soldiers of the victorious side will collect the belongings of the soldiers that were killed. In this instance, American soldiers found and collected these special flags that the Japanese soldiers were carrying. Over the years, American veterans of the war kept these WWII Japanese flags as souvenirs of the war.

Recently however, a number of those flags have been returned to their rightful owners. You might ask, what is the point? It has been seven decades since the end of the war and many of the people involved in the creation of these flags are likely no longer with us. “I just thought, the war is over. We’re not enemies anymore, we’re friends. They should get the flag back” said Leslie Weatherfill, an American veteran who collected a flag from a fallen Japanese soldier.

You might also be surprised to hear that Japanese consulates in cities like Portland and Seattle have been inquiring about the flags and other war memorabilia. A nonprofit organization named Obon 2015 was formed to help families locate and return the property of fallen soldiers. With Obon 2015’s help, five WWII Japanese flags were recently returned to their original owners. A Japanese Counsul General from Portland claims that they have about a 50 percent success rate on their ability to reconnect American war souveniers with the items original owner. For these five WWII Japanese flags, the success rate was 100%. A ceremony was held in Astoria, Oregon to commemorate the returning of the flags.