On Pearl Harbor Day, the American flag should be flown at half-staff until sunset to honor those who died as a result of the attack on U.S. military forces in Hawaii. Pearl Harbor Day is not a federal holiday – government offices, schools, and businesses do not close. Some organizations may hold special events in memory of those killed or injured at Pearl Harbor.

Join us in proudly flying your U.S. flag in honor of this special day.

Just because it’s winter, does not mean you need to take your flag down. There are many ways you can… 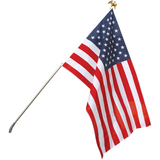